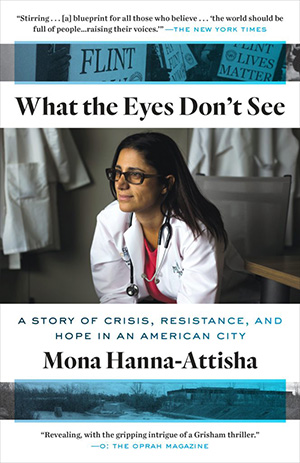 The book is the 2019 “One Maryland One Book” (OMOB) selection chosen by the Maryland Humanities Council: What the Eyes Don’t See: a story of crisis, resistance, and hope in an American city, by Dr. Mona Hanna-Attisha, c2018.

From One Maryland One Book:

This year’s inspirational read is What the Eyes Don’t See: A Story of Crisis, Resistance, and Hope in an American City by Mona Hanna-Attisha. The book chronicles Dr. Mona’s relentless pursuit to uncover the contamination of Flint, Michigan’s drinking water, which would lead to her testifying in front of Congress. Gripping and emotional, Dr. Mona’s personal account reads like a scientific thriller as she vividly recounts the effects lead poisoning had on her young patients and the evidence she gathered to share with the world.

Register for Event: Pratt Book Discussion: One Maryland One Book

Make sure to copy Registration number after successful submission.

Thank you for payment.

Stay in the loop

Your ticket for the: Pratt Book Discussion: One Maryland One Book